Our Top 10 beaches on the Fleurieu Peninsula – Part 1

We all know that South Australia has the best beaches! There are so many on the Fleurieu Peninsula that I have created a two part blog. So, that is really 20 super amazing beaches!
Part 1- runs from Sellicks Beach to Port Noarlunga – mid coast.  Get amongst it – whatever the season.

Cactus Canyon is a steep-sided canyon that reaches the coast 500 m south of Sellicks beach. The canyon and neighbouring creeks have delivered rocks to the shore that have been reworked by the waves to form a high tide shingle beach, overlain by a veneer of sand. The beach extends south of the canyon for 1 km to where it merges with the boulders of the neighbouring beach.  Often referred to as ‘the land before time’ by photographers.  A geologists delight. 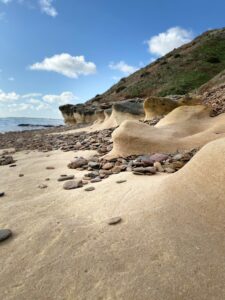 Pick your tides before you drive on to the amazing Sellicks Beach.  The southern point of this beach is a dog friendly beach – all year around.   Kids and dogs have plenty of room to run around and discover amongst the rock pools.

This is another popular drive-on beach with expanses of sand that go on for kms.   Set up beach camp for the day or if you turn right at the Aldinga ramp, this is a prime spot for ‘small’ boat beach launching for fishing or kayaking.  Be mindful of markers on cliffs for protected marine areas.   Food trucks are scattered along the sandy beach or you can visit ‘Pearl’ for a coffee and the ‘fresh’ catch of the day. 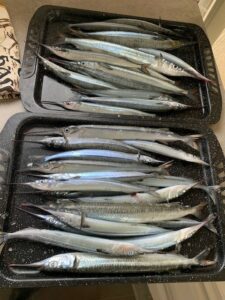 Port Willunga jetty. The first jetty was built in 1853 and several months later an additional 52 metres was added. However this still gave inadequate water at low tide. The placement of the jetty was also questioned. In 1857 the jetty was extended again to give a length of 145 metres.

Port Willunga was at this time one of the busiest ports in the colony of South Australia with the large wheat crops of the immediate interior being exported from its jetty. The farmers petitioned for a new and longer jetty and this was constructed in 1867 some 400 metres to the south of the old jetty. It was opened in February 1868. A depth of between 3 and 3.6 metres at medium low water was achieved.

Local farmers petitioned for a further extension and a T-head but this was not agreed to. By the early 1870s the grain trade was depressed: the local flour mills had been closed by 1900. Slate continued to be exported for some time from the jetty.

The Port Willunga jetty and beach are one of the most photographed and instagrammed beaches. If you haven’t been there yet – it is sure worth a swim, stroll or a lunch from the cliff at ‘The Star of Greece’.

Snorkel the ‘Star of Greece’ Shipwreck.

This beach and cliff car park is an aquatic ‘theme park’.  Surfing, snorkeling, fishing, beachcombing  and photography.  One of the most spectacular sunsets spots.  #Vanlife and surfers frequent this location adding to the vibe.

Urban Forest Biodiversity Program volunteers have done an exceptional job at revegetating the paddocks surrounding the upper car park.  It appears that surrounding farmers have further added to these fantastic tree corridors.

A secluded beach with the only access being from the cliffs.  Amazing hang gliding platform or a super spot for model plane flights.

At Ochre Point the beach narrows to a sandy high tide beach that runs for 1 km along the base of the steep 60 m high bluffs, and fronted by 50 m wide intertidal rock rubble then reef flats. The only access is on foot from either end, while on the beach there is only one small sandy access gap through the reefs located toward the southern end of the beach.  Picturesque view on the walk along the cliffs offers 180 ° views of the southern Maslins beach cliffs and the foothills.

Moana Beach ticks all the boxes.  Half drive on /half walk on beach.   There are ample opportunities for surf grom lessons, an accessible caravan park on the front and Deep Blue or Dukes cafe do keep you nourished.  It ticks all the boxes for a family beach getaway.  Get the bike or walking shoes and make your way along the well paved esplanade walk.

The Port Noarlunga rivermouth use to be one of the best kept secrets.  The cliff stairway has become iconic and it would be mean not to share these spectacular cliffs.  Kayakers , Stand-up paddleboarders and fisherman enjoy the calmer Onkaparinga River.  Surfers are seen dotted along the break at the ocean mouth opening or visitors roaming over the protected marine park.

Port Noarlunga is an idyllic seaside town.  The red sandstone cliffs, long jetty and 1.6km of reef making it a divers destination.  It seems to be a ‘right of passage’ to go jetty jumping in your teens and the friendly fisherman/woman are happy to let you know what they have caught for the day.

The reef and aquatic reserve forms part of the Encounter Marine Park – a divers and snorkelers paradise and also viewable from the end of the jetty. The reef is home to more than 200 species of marine plants, which the fish love too and can be further discovered by the self guided Aquatic Trail for divers.

The small town has many awesome cafe’s, restaurants and ice creameries…all within a short stroll off of the sand.

This seaside spot became very popular in the 1950’s prior to development further south.   The dramatic cliffs are spectacular and a busy beach during tourist season.

Upcoming developments include a Witton Bluff base trail.  Due to start in 2021 based on community engagement outcomes.

We encourage you to go ‘Over The Top’ by joining the ‘Oliver’s Taranga Team’.

Receive your favourite Oliver’s Taranga Wines delivered to your door every three, six or twelve 12 months.

We have been lucky enough to have had so many fantastic visitors come through Oliver's over the summer break, including Peter - thanks so much for the amazing review ❤ We really do love going above and beyond for our customers, and making sure they enjoy the entire experience of coming to see us! Special mention to Mel, Mark & Las for this visit.
.
.
#customerservice #oliverstaranga #mclarenvale #mclarenvalewine ...

If you're thinking of a sneaky mid-week WFH day now the kids are back at school, then we've got some very cosy corners or cruisy deck space that would make for some thrilling zoom backgrounds for meetings 😉 Work life balance am I right?
.
.
#otstyleselfcare #oliverstaranga #mclarenvale #mclarenvalewine ...

Cellar Door is open today from 10-4, and the weather has kindly obliged with plenty of sunshine on a public holiday, lucky us! Make a beeline for the deck and a cold glass of something refreshing, the team are looking forward to seeing you all! It's the last weekend of #SummerVines too, so check with staff if you can sneak in a Taranga Terroir Tour as well...
.
.
#oliverstaranga #mclarenvale #mclarenvalewines #SeeSouthAustralia ...

Marj is especially pumped to be welcoming people to Oliver's for #SummerVines from today! Don't get left out, book your spot today on 'Ollie' the buggy for a special edition Taranga Terroir Tour, and enjoy the ride! (link in bio)
.
.
#summervines #oliverstaranga #mclarenvale #mclarenvalewine #seesouthaustralia ...

As a mark of respect for @darenbergwine icon and all around McLaren Vale legend d'Arry Osborn, we will be closing the Oliver's Cellar Door from 3pm today during his memorial service. If you want to find out a little more about d'Arry, Corrina wrote a wonderful article about him for @fleurieulivingmagazine a few years back, which we have made available on the OT website for you to read. A great way to remember a true gentleman (link in bio)
.
.
#darenberg #oliverstaranga #mclarenvale #mclarenvalewine ...

Say hello to Fiano, the newest Oliver’s puppy to join the crew. Thanks for sharing your fur baby with us @nicholasgoodfellow 😍🐶 Fair warning though, the CD team might not give her up for cuddles 🥰 #puppylove #welovedogs #oliverstaranga #mclarenvale #mclarenvalewine ...